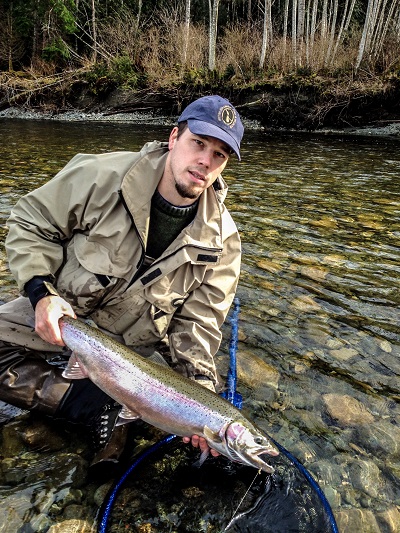 If, with the knowledge we now have, we allow this [river] to become destroyed, we ourselves are nothing important.
'Writings and reflections'. Roderick Haig-Brown

This living river is struggling these days. Once renowned for its fishing, it is now off limits to angling along much of its course and having some difficulty coming back from the brink. I was there the other day taking photographs for my son-in-law who has long worked for its recovery through a variety of governmental and conservation organizations.

We approach down an old logging grade and wade across a shallow place to the far shore. I have been asked by Mike to document the catching of Steelhead sea-run trout, the placing of miniature tracking radios, and their release again. This science is being done to gain accurate information about population size and behaviour so that recovery of the stock may be truly effective. Between photos I am free to look around me, to attempt to understand what I see, what part the past has played in the formation of the present river and where its future may lie.
Like some other rivers along the east coast of Vancouver Island, the Englishman is short, steep and rapid. Draining the central ridge of mountains, the lakes that lie at its feet, and the flatter land closer to the sea, the river rushes down to the Gulf of Georgia, emerging near Parksville, just north of the city of Nanaimo. Even on a human time scale there have been great changes within the past century and a half, as European settlement has become more and more influential in the life of this river. Ten thousand years ago though, the glaciers which had covered all but the highest places were finally in retreat and massive amounts of melt water performed much of the land forming that returning vegetation would colonize, established the broad course of the rivers, carved the falls, the canyons and deposited the sand and gravel of the ocean beaches we enjoy today. Beside me on this gravel bar are hardy willows gaining a root-hold , just as they must have in those ancient days, and closer to the forest proper, young alders and taller willows lean over gravel flood channels and recently isolated pools of water. As the river changes course over time, gnawing at the outer edges of curves and depositing sand and gravel on the inner, it works its way back and forth across its original wider course. But then, for a relatively narrow river, this is a very wide gravel bar we are fishing from. Why is this? 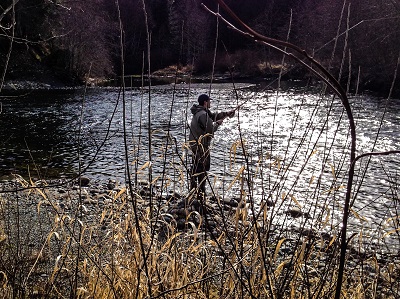 Not only is the bar wide, but on the far bank the river is still carving into the land, undermining enormous old growth trees which then fall into the fast moving water and, lodged there, further intensifying the flow against the gravel banks. It is very beautiful on this mid February winter’s day and it is not easy to separate what is natural river formation and what is out of the ordinary. Our usual interaction with the river is a micro-second glance in our peripheral vision as we drive over the highway bridge, or we may visit a park and gaze at a waterfall, at a small section of the greater whole, with minimum understanding. We see it in a small bite of time and space and assume that what we see is business as usual. 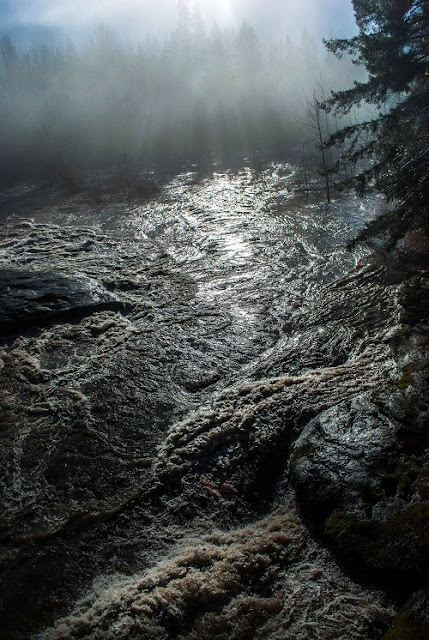 I visited the Englishman once in the Fall when the river was a raging torrent; so powerful, so aggressive, like an enormous jet from a fire hose as it tore at its banks and tossed whole trees down the falls. Normal or exceptional? Normal for the present or in the past as well? I only have to go to 'Google Earth' and have a look at the big picture to realize that the forested banks are but a thin corridor shielding the river from human settlement and that the upper watershed in the shadow of Mount Arrowsmith has, like nearly all of central Vancouver island been stripped of much of its vegetation. Helicopter logging of old growth trees, so essential for the health of the river and its related communities, is still going on in the as yet less damaged upper reaches of tributaries and nearly a third of the watershed is in private hands and subject to continued logging. With extreme weather events, which are becoming more common, there is nothing much to slow the runoff. This wide gravel bar, that gnawed far bank, these enormous trees with their roots anchoring them in the stream may not be normal at all.

It also turns out that even some of what I see before my eyes is actually artificial: those tangles of logs along the bank, below which Steelhead lie waiting to rush out for the hook, have been constructed and are held in place by steel cables, and the boulders I slipped over fording the river have been put into place by an excavator. There has been a lot of careful work done here by many levels of government and NGOs to save the lower reaches of the river. The fishing that I am helping with today is not for sport but is part an earnest effort to bring the Englishman back to the world class angling stream that it once was.

A river is a fairly simple phenomenon: water runs down hill until it reaches equilibrium; so this river will continue to do that into the distant geological future. It just may not always be what we would like in our present day human context. For now, it supplies fresh water to coastal communities at little cost, and if the fishing can be improved it will be a valuable economic resource once more and the presence of those mighty Steelhead a balm to our lives. We think of nature as a resource for all our many needs and we treat it as such. Draw out too much too fast from the capital however and what seems so limitless will fail us. The establishment of protected zones along the main course of the Englishman and in the estuary, all the investment in time and money by many organizations and individuals, is such a valuable attempt to counterbalance what otherwise seems a hopeless and irreversible trend. 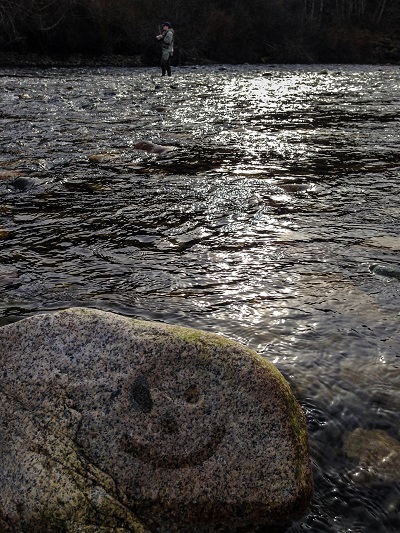 There is nothing inherently wrong with the reality of rivers and the natural world, but there is something rather awkward about human beings, or at least this last destructive wave of human settlement over the past one hundred and fifty years. We need to think of the river as a single unit, from source to ocean rather than a series of emergency parts; repairing one, while permitting logging in another. We need to see the river as a totality: an old growth forest and complex community of beings including its fish, as well as fresh water for our human communities. The Englishman River with its long history and present problems is held up before our eyes and its future welfare is closely tied to our own. 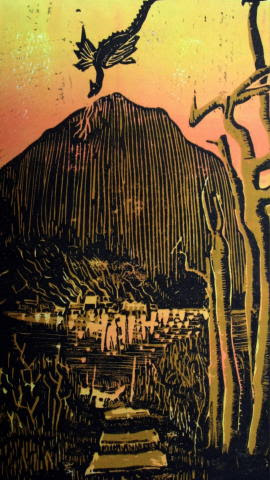 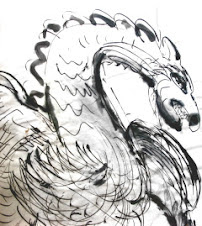