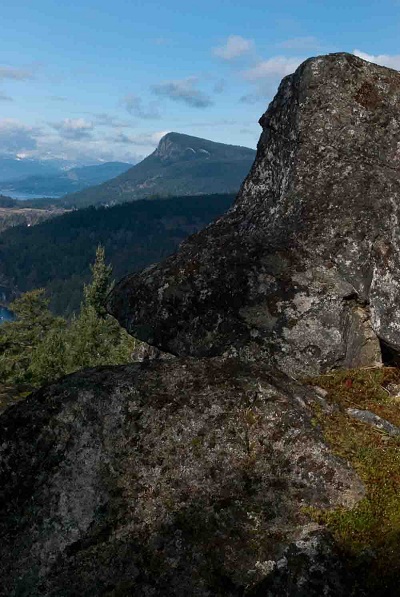 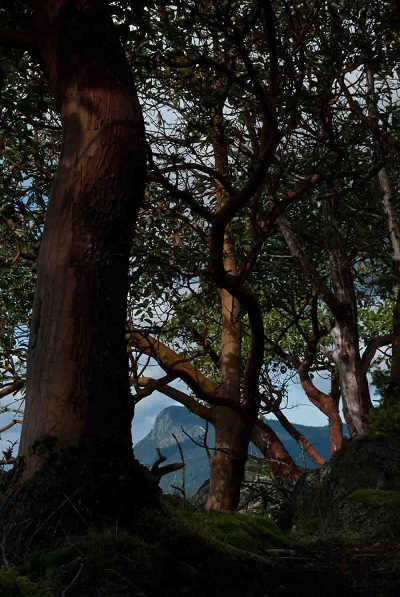 Ever since we discovered the excellent British crime writer Reginald Hill we have laughed a little over our local mountain of the same name. I had been working my way higher and higher up its rocky slopes from Indian Point over the past couple of weeks and finally decided to actually climb to the summit on an established trail that begins from the Fulford Harbour side. I bought a good hiking book (“Hiking the Gulf Islands’ by Charles Kahn) and drove to the beginning of the trail. “Strenuous, steep trail”, said the guide and sure enough I soon found myself climbing a wet, rocky hillside that was clothed in moss and second growth forest. Puff, puff, Bill is out of shape, but with a stick to aid me I scrambled upward out of the shadows toward the sunlight. It was a frosty March morning on the shady side of the hill, but I was never-the-less reminded of a similarly steep trail in Samoa that lead in tropical heat up the slopes of another hill on the top of which was Robert Louis Stevenson`s grave. Perhaps it was the same combination of steep trail, early morning, the lure of bright sunlight at the summit and the hopes of a wider perspective. When I finally reached the mossy top of the hill I could see for miles, across the Burgoyne valley towards Mount Maxwell and the distant snowy mountains of Vancouver Island in one direction and out across the shining ocean to the Gulf Islands in the other. Here was the perfect place for a typical viewpoint panorama photo with a wide angle lens to get in as much in as possible while balancing on the cliff edge. I did give in to that temptation once or twice before getting down to something a little more creative. It was as though I needed to do some basic exercises in this new environment before getting down to business. What was special about this place and what did I need to do to capture it?
The first thing I chose to do was to put the distant view in the context of the mountain top itself, include some foreground, frame the distant through the near, the panorama within the local context. A nearby rock outcrop repeated the form of Mount Maxwell in the distance, a grove of small arbutus trees filled the frame and created a tunnel through which we see the distant mountain: a mountain which would seem insignificant without this tight, close-up framing. Ravens tossed themselves through the vivid air, chatting to each other and to me, an immature eagle landed on a snag just below the hill crest and the morning breeze ruffled the forest canopy far below. 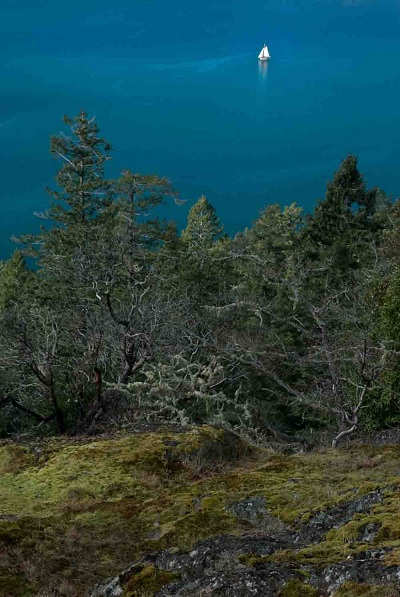 I soon found a faint trail on the other side of the hilltop and followed it down to another series of mossy bluffs; there was subject matter overflowing here, gnarled old firs, slim arbutus, contorted oaks and the bay far below. Wait! A little gaff rigged sloop catches the breeze on its way out of the harbour and while that would draw my attention anyway, I now had a point of interest for my compositions. Those white sails gave a sense of scale and action. Soon I have worked my way down slope in the direction of Indian Point, perhaps I did not need to follow the guide book but could find a new way down! Fortunately, I remembered the stories of hikers falling to their deaths or being marooned on innocuous seeming but suddenly steep and slippery mossy slopes like these. I turned back to the summit and followed the official trail back to the car.
I have been taking plenty of photographs lately, and I sometimes wonder for what purpose? I do not have a customer for them, I will most likely not even publish most of them in any form, and yet here I am doing something that is very satisfying; this composition thing, the framing of wild nature into an organized communication: trees, clouds, rocks, a boat in the bay, distant mountains, the glare of sun on water and the ruffling leaves in the morning breeze, all this to be condensed into the small compass of the camera`s frame. The challenge of creating within an art form that can transmit all that is special about this mountain, this day, my choice of path and where I choose to direct my gaze up here upon Reginald Hill. 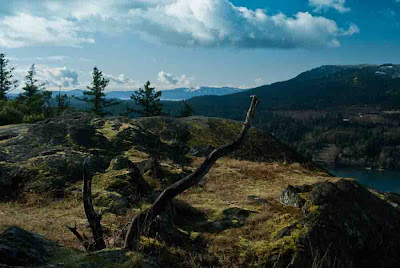 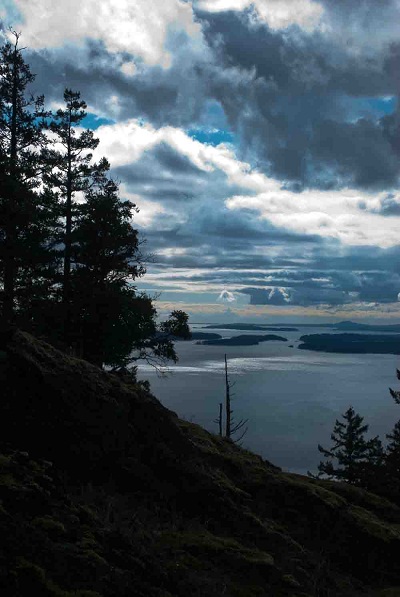